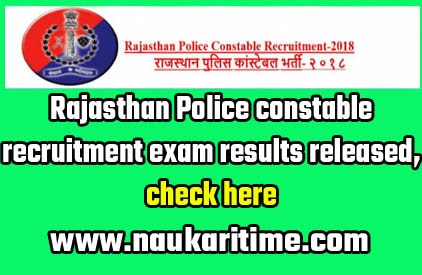 for the recruitment of Rajasthan Police Constable, 5438 posts notification was released in November 2019 and the last date to apply was February 2020. About 17 lakh candidates have applied for these posts. The police department has also issued the results of 6 districts including Sikar, Jhunjhunu, Alwar, Jaipur Rural, Karauli, and Dholpur units. Results of the remaining districts will also be released soon. Candidates who have cleared the written examination will now undergo physical proficiency test by the Rajasthan Police.

Rajasthan Police Constable (General and Driver) Recruitment Examination will be conducted the physical proficiency test of the candidates. Physical standard test (PST) of the candidates will be done during PET. For Constable (GD) posts, PET has 15 marks, while for Constable (Driver) posts, PET has 10 marks, and the remaining marks are also prescribed for Driver Tests. At the same time, a total of 75 marks were conducted for both the written examination and 100 marks would be considered as standard for the entire selection process.

Rajasthan Police Constable Recruitment Exam results, first of all, visit the official website of the Police Department. After this, click on the link of the result given on the home page. After this, the candidates click on the link related to their results. Next, fill in your roll number and application number in the new tab and submit it. After submitting the information, the result will appear on the 2021 screen, which can be downloaded or printed.